Yitzhak Rabin was an Israeli politician and general. He was the fifth Prime Minister of Israel, serving two terms in office, 1974–1977 and 1992 until his assassination in 1995. In 1994, Rabin won the Nobel Peace Prize together with Shimon Peres and Yasser Arafat. He was assassinated by a right-wing Israeli radical opposed to Rabin's signing of the Oslo Accords. Rabin was the first native-born prime minister of Israel, the only prime minister to be assassinated and the second to die in office after Levi Eshkol.

Yitzhak Rabin was born in Jerusalem in 1922 to Nehemiah and Rosa, two pioneers of the Third Aliyah. Nehemiah Rubitzov, born in a small Ukrainian town in 1886, lost his father when he was a child and worked to support his family from a young age. At the age of 18, he emigrated to the United States, where he joined the Poale Zion party and changed his surname to Rabin. In 1917, he went to the British Mandate of Palestine with a group of volunteers from the Jewish Legion. Rabin's mother, Rosa Cohen, was born in 1890 in Mohilev in Belarus. Her father, a rabbi, opposed the Zionism movement, but sent Rosa to a Christian high school for girls in Homel, enabling her to acquire a broad general education. Early on, Rosa took an interest in political and social causes. In 1919, she sailed to the region on the S.S. Ruslan, the bellwether of the Third Aliyah. After working on a kibbutz on the shores of the Sea of Galilee, she moved to Jerusalem.[1]

Rabin grew up in Tel Aviv, where the family relocated when he was one year old. In 1940, he graduated with distinction from the Kadoori Agricultural High School and hoped to be an irrigation engineer.[2] However, apart from several courses in military strategy in the United Kingdom later on, he never pursued a degree.

Rabin married Leah Rabin (née Schlossberg) during the 1948 Arab-Israeli War. Leah Rabin was working at the time as a reporter for a Palmach newspaper. They had two children, Dalia and Yuval.

The assassination of Yitzhak Rabin took place on November 4, 1995, at 21:30, at the end of a rally in support of the Oslo Accords at the Kings of Israel Square in Tel Aviv.

After the rally, Rabin, the Israeli prime minister and defense minister, walked down the city hall steps towards the open door of his car. Three shots were fired towards Rabin, who had chosen to not wear a bulletproof vest when asked to before the rally.[citation needed]

The assassin was Yigal Amir, a former Hesder student and Orthodox far-right law student at Bar-Ilan University, who had strenuously opposed Rabin's peace initiative and especially the signing of the Oslo Accords. He was subdued and arrested immediately with the murder weapon, a Beretta 84F semi-automatic pistol .380 ACP caliber. He also shot and slightly wounded Yoram Rubin, a security guard, with a third bullet that missed Rabin.[1][2] Incidentally, Rubin was also a geography student at Bar-Ilan University at the time.

Rabin was rushed to the Ichilov General Hospital at Tel Aviv Medical Center, where he died from his wounds within 40 minutes. Rabin's bureau chief, Eitan Haber, announced outside the gates of the hospital: "The government of Israel announces in consternation, in great sadness, and in deep sorrow, the death of prime minister and minister of defence Yitzhak Rabin, who was murdered by an assassin, tonight in Tel Aviv. May his memory be blessed."

In Rabin's pocket was a blood-stained sheet of paper with the words to Shir Lashalom ("Song to Peace"), which ironically dwells on the impossibility of bringing a dead person back to life and therefore the need for peace. 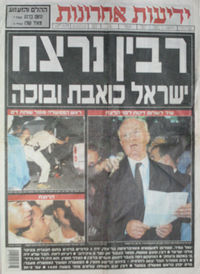