View all events from February

Rabbi Auerbach was born in the Sha'arei Chessed neighborhood of Jerusalem founded by his maternal grandfather, Rabbi Shlomo Zalman Porush, after whom he was named. His father Rabbi Chaim Yehuda Leib Auerbach headed the Shaar Hashamaim Yeshiva.

By the age of eleven he was proficient in the entire talmudic tractate of Kiddushin. As a teenager he attended the Etz Chaim Yeshiva in Jerusalem. He was known for his diligence which is illustrated by an event which occurred while he was in yeshiva. On the day the first automobile rolled into Jerusalem along the Jaffa Road, all the students left their studies to marvel at the horse-less wagon. Only young Shlomo Zalman remained in his chair immersed in his studies.[1] Following his marriage he studied under Rabbi Zvi Pesach Frank at Kollel Kerem Tzion which focused on the laws of the Land of Israel.

His first major published work, Meorei Esh, was the first ever written on the subject of using electricity on Shabbat. The work was endorsed by Rabbi Chaim Ozer Grodzinski who read it and declared: "Or chadash al Tziyon ta'ir" — "A new light will shine upon Zion" — a quote from the daily morning prayers.

He had a close association with Rabbi Chaim Ozer Grodzinski, as well as the Chazon Ish and Rabbi Elazar Menachem Shach, the two iconic and preeminent leaders of Haredi Judaism of the first and middle segments of the 20th century. He became the pre-eminent Halachic decisor of his time in Israel, respected by all streams of Orthodox Judaism. He was unique in his approach to Halacha through thought experiments.

Renowned for his lucid classes as Rosh Yeshiva, his thousands of students continue to influence the Torah world today. An estimated 300,000 - 500,000 people attended his funeral in 1995. 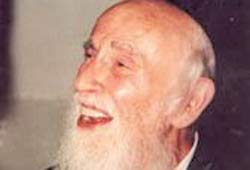