Operation Nachshon (Hebrew: מבצע נחשון‎, Mivtza Nahshon) was an Israeli military operation during the 1947-1948 Civil War in Mandatory Palestine. Lasting from 5-20 April 1948, its objective was to open up the Jerusalem road that was blockaded by Palestinian Arabs and to supply food and water to the Jewish community of Jerusalem. It was the first major Haganah operation and the first step of Plan Dalet whose aim was to secure the area allotted to the Jews by the 1947 UN Partition Plan. The operation was carried out by the Givati and Harel Brigades, with the Irgun and Lehi participating in the capture of Deir Yassin which was not originally included in the plan.

At the end of March 1948, Abd al-Qadir al-Husayni's troops were preventing supply convoys from reaching Jerusalem. The city was besieged and the Jewish population was forced to adhere to a rationing system. As the first operation of Plan Dalet, Yishuv leader David Ben-Gurion decided to launch the an operation to open up the city and provide supplies to the Jewish residents.

The operation was named after the Biblical figure Nachshon Ben Aminadav, who was the first to wade into the Red Sea when the Hebrews escaped from slavery in Egypt. The operation was commanded by Shimon Avidan.

The first orders were given on 2 April 1948.[2] A telegraph confirming the beginning of the operation, was released on 5 April, with the operation starting that same night. It lasted until 20 April.[3] 1,500 men from the Givati and Harel brigades took control of the road to Jerusalem,[4] allowing three of four convoys to get to the city.[5]

The operation was a military success. All the Arab villages that blocked the route were either taken or destroyed, and the Jewish forces were victorious in all their engagements. Nonetheless, not all the objectives of the operation were achieved, as only 1,800 tonnes of the 3,000 envisaged were transported to the town, and two months of severe rationing had to be assumed.[6]

al-Husayni was killed during the night of 7-8 April, in the middle of the battles taking place in Al-Qastal. The loss of the charismatic Palestinian leader 'disrupted the Arab strategy and organisation in the area of Jerusalem.'[7] His successor, Emil Ghuri, changed tactics: instead of provoking a series of ambushes throughout the route, he had a huge road block erected at Bab-el-Oued, and Jerusalem was once again isolated as a consequence.

Operation Nachshon exposed the bad military organisation of the Palestinian paramilitary groups. Due to lack of logistics, particularly food and ammunition, they were incapable of maintaining engagements that were more than a few hours away from their permanent bases.[9]

Faced with these events, the Arab Higher Committee asked Alan Cunningham to allow the return of the Mufti, the only person capable of redressing the situation. Despite obtaining permission, the Mufti did not get to Jerusalem. His declining prestige cleared the way for the expansion of the influence of the Arab Liberation Army and of Fawzi al-Qawuqji in the Jerusalem area.[10]

Right after opening the road to Jerusalem, a Jewish convoy, including 60 vehicles headed towards Jerusalem, through Hulda.[citation needed] At the last day to this operation, 3 convoys, loaded with supply managed to make their way to Jerusalem successfully. However, the Arabs managed to block the road again, immediately thereafter. 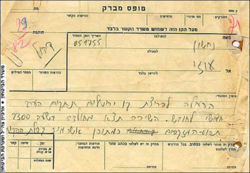