Born in Lita, Moshe Avigdor Amiel was first taught by his father at the Telz yeshiva before proceeding to the Vilna yeshiva to study under the two greatest Talmudic scholars of the time - Rabbi Chaim Soloveichik and Rabbi Chaim Ozer Grodzinsky. He received his ordination at the age of eighteen and in 1905 was appointed Rabbi of Swieciany, where he founded a large yeshiva. In 1913, he became Rabbi of Grajewo located on the border between Russiaand Germany.

It was during this time that Rabbi Amiel was acknowledged as a great public preacher and his oratorical qualities were said to affect the most hardened hearts. He became one of the first Rabbis to publicly join the Mizrachi movement and Zionist organization, applying his speaking and writing abilities to the cause of Religious Zionism and national questions. In 1920 he was elected as one of the delegates to represent Mizrachi of Poland at the Mizrachi World Convention in Amsterdam. There he made such an impression upon the Jewish community that he was given the post of Rabbi of Antwerp, one of the largest and richest Jewish communities of the time. He set up a system of lower yeshivot for girls and boys by creating the Jewish Day School (as it came to be known in America), as well as religious institutes of higher learning.

Realizing that he must actively fulfill his Zionist ideals, in 1936 Rabbi Amiel made aliyah in order to serve as Chief Rabbi of Tel Aviv. This area had the largest concentration of Jewish population in the yishuv and presented a great deal of challenges for Rabbi Amiel. Particularly hard was the constant need to engender good relations between the religious and non-religious segments of the community. During his leadership he set up a yeshiva high school which taught religious subjects in the morning and secular in the afternoon. This yeshiva, named Yeshiva Ha'Yishuv Ha'Chadash, was used as the pattern for the B'nei Akiva yeshivot which were subsequently established. After his death the yeshiva was renamed Yeshivat Ha'Rav Amiel.

He also continued his work on behalf of Mizrachi in Eretz Yisrael, as well as running many Torah institutions in the country. He was an author of renown who produced many works in the areas of halacha, aggada, machshava, sermons and articles on Religious Zionism. 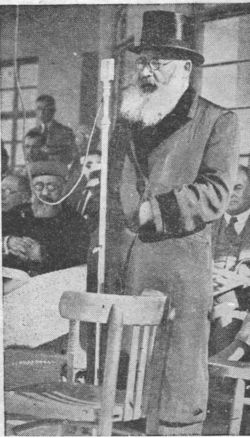