The critical change in Iraqi Jewish identity occurred after the violent Farhud or pogrom against the Jews of Baghdad, on June 1-2, 1941 following the collapse of the pro-Nazi Golden Square regime of Rashid Ali al-Kaylani regime. At least 180 Jews were killed during two days of riots.

Since 1945 in Iraq, there were frequent demonstrations against the Jews and especially against Zionism. On 1947 with the affirmation of the Partition Plan for Palestine, the Jews felt that they were in danger of their lives. Many received harsh legal sentences, or were forced to pay heavy fines.

Between 1949 and 1952, about 130,000 Jews immigrated to Israel from Iraq, thanks largely to the efforts of emissaries from Israel and activists of the "Halutz Movement" in Iraq. One of the key figures was Shlomo Hillel, an Iraqi Jew who went on to become a minister in the Israeli government.

The Exodus of Iraqi Jews to Israel lasted several months, and started after the Iraqi Government passed a special bill permitting their emigration in 1951. The Iraqi Jews were mostly wealthy and the local authorities gave them special privileges. When the Jews learned about the special permit they had been given, thousands arrived in Baghdad and gathered in registration centers where they registered for immigration to Israel.

According to Iraqi law, the Jews had to sell their property and liquidate their businesses before they could leave. Many sold large properties for small sums in order to win the right to emigrate. 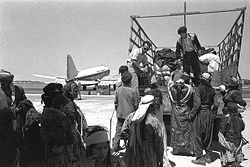