Avshalom Feinberg from NILI was killed

Additional Details: Avshalom Feinberg was one of the leaders of Nili, a Jewish spy network in Ottoman Palestine helping the British fight the Ottoman Empire during World War I. Feinberg was born in Gedera, Palestine, then part of the Ottoman Empire, and studied in France. He returned to work with Aaron Aaronsohn at the agronomy research station in Atlit. Soon after the beginning of war, Aaronson founded the Nili underground along with his sister Sarah Aaronsohn, Feinberg and Yosef Lishansky. In 1915 Feinberg travelled to Egypt and made contact with British Naval Intelligence. In 1917, Feinberg again journeyed to Egypt, on foot. He was apparently killed by a Bedouin near the British front in Sinai, close to Rafah. 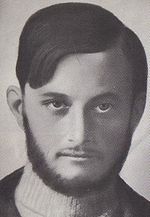