Elimelech Weisblum of Lizhensk (Polish: Leżajsk) (1717-1786) was an Orthodox Jewish rabbi and one of the great Hassidic rebbes of the past. He was also known as a tzaddik who devoted his life to studying and teaching the Torah, as well as encouraging people to repent and return to God. He was an ascetic, who believed in staying away from alcohol. Rebbe Elimelech was a prominent student of the Maggid of Mezeritch, and was brought under his tutelage by his illustrious brother the famous Tzadik and Rebbe Reb Zisha of Hanipoli. After the death of the Maggid of Mezeritch, he was considered by most of the Maggid's students and followers as his successor.

Rebbe Elimelech had many famous rebbes as students and talmidim including the famous Chozeh of Lublin, Rebbe Menachem Mendel of Rimanov, the Kozhnitzer Maggid, the Apter Rov, the author of Maor veShemesh Rabbi Kalynomus Kalman Epstein, Rav Naftali of Ropshitz, Rebbe Dovid Lelover and many others.

He was born in Galicia, a region of southeast Poland, and died in Leżajsk, Poland. He is also known by the name of his book Noam Elimelech; the title of his most popular work. This book is one of the principal works of Hasidism. The work itself has asterisks or stars placed in random places over words. It is said that angels dance over these stars, although there is no basis for this belief in halachic Judaism. The Klausenberger Rebbe once said that the stars in the heavens are a commentary to the stars in the book Noam Elimelech. As such, all subsequent printings have included these stars. The Noam Elimelech also wrote Tzetl Koton, a seventeen-point program on how to be a good Jew.

To this day, his grave in Lizhensk is visited by thousands of those faithful to Hasidism, particularly on the anniversary of his death, the 21st of the Hebrew month of Adar (and Adar II in leap years). 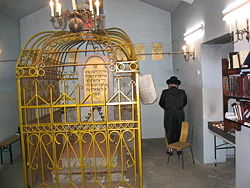