Gush Etzion (Hebrew: גוש עציון‎, literally bloc of Etzion) refers to a group of Jewish villages established from the 1920s south of Jerusalem on the northern part of Mount Hebron in Judea, and destroyed during the 1948 Arab-Israeli War. It also refers to the group of Israeli settlements established following the 1967 Six-Day War in the same area, by then the West Bank.

The first modern Jewish attempt to settle the area known today as Gush Etzion took place in 1927 by a group of Yemenite Jews who founded an agricultural village called Migdal Eder (Hebrew: מגדל עדר), in reference to a biblical location (Genesis 35:21)[1]. The location was purchased because it was roughly equidistant from Bethlehem and Hebron, and thus fell between the zones of influence of the local Arab clans. Two years later, the 1929 Palestine riots and recurring hostilities forced the group to flee.

In 1935, Jewish businessman Shmuel Holtzmann provided backing for another attempt at settling the area. The initial kibbutz was named Kfar Etzion, or 'village of the tree', in his honor, as the German Holz means 'tree', as does the Hebrew etz. The 1936-1939 Arab revolt made life intolerable for the residents, so they returned to Jerusalem in 1937.

The Jewish National Fund organized a third attempt at settlement in 1943 with the refounding of Kfar Etzion by members of the religious Mizrachi movement.[2] Despite the tough soil, shortage of potable water, harsh winters, and constant threat of fatal attacks, this group managed to succeed. Their isolation was somewhat relieved by the establishment in 1945 of Massuot Yitzchak and Ein Tzurim, also populated by young members of the Mizrachi. Against the backdrop of an impending struggle for Israeli independence and as a show of solidarity, the secular Hashomer Hatzair founded a fourth kibbutz, Revadim.

On November 29, 1947, the United Nations approved the Partition Plan. The bloc fell within the area allotted to the Arab state, but the Haganah command decided not to evacuate the bloc. The Arab hostilities began almost immediately, and travel to Jerusalem became exceedingly difficult. For five months the bloc was besieged, first by Arab irregulars, and then by the Jordanian Arab Legion. Throughout the winter hostilities intensified and several relief convoys from the Haganah in Jerusalem were decimated by Arab ambushes. In January, the women and children were evacuated with British assistance. An emergency reinforcement convoy attempting to march to Gush Etzion under cover of darkness were discovered and killed. Despite some emergency flights by Piper Cubs out of Tel Aviv onto an improvised airfield, adequate supplies were not getting in.

On March 27, land communication with the Yishuv was severed completely when the Nebi Daniel Convoy was forced to retreat back to Jerusalem. In the following months, Arab irregular forces continued small-scale attacks against the bloc, which the Haganah was able to effectively withstand. At times, the Jewish forces even ambushed Arab military convoys, (and, according to Morris, also Arab civilian traffic and British military convoys[3]) on the road between Jerusalem and Hebron. The defenders of Gush Etzion and the central command in Jerusalem mulled evacuation, but although they had very few arms, a decision was made to hold out due to their strategic location as the only Jewish-held position on Jerusalem's southern approach from Hebron.[4]

On 12 May, the commander of Kfar Etzion requested from the Central Command in Jerusalem a permission to evacuate the kibbutz, but was told to stay. Later in the day, the Arabs captured the Russian Orthodox monastery, which the Haganah used as a perimeter fortress for the Kfar Etzion area, killing twenty-four of its thirty-two defenders. On May 13, a massive attack involving parts of two Arab Legion infantry companies, light artillery[3] and local irregular support commenced from four directions. The kibbutz fell within a day, and the Arab forces massacred the entire population of Kfar Etzion, soldiers and civilians alike, the total number of victims of the final assault and following massacre reaching 250. Only three men and one girl managed to escape.[4] The next day, the three other kibbutzim surrendered, the same day as the declaration of independence, their defenders imprisoned by the Arab Legion. 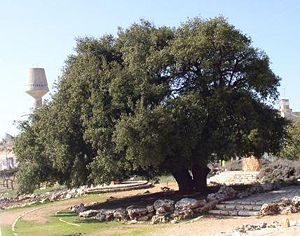