Crystal night, as the pogrom that occurred on the night of November 9-10, 1938 was called, resulted in the destruction of nearly all the synagogues in Germany and Austria (more than 1,500), many Jewish cemeteries, thousands of Jewish owned stores and 29 department stores. More than thirty thousand Jews were arrested, sometimes by predetermined lists, and were sent to concentration camps. Some 400 Jews were murdered and hundreds more seriously hurt. A few Germans with a “Jewish appearance” were also murdered.

The pogrom against Jews was well organized and coordinated, firs tin Munich and later in Berlin and throughout the Reich. It was described officially as a spontaneous outbreak of the angry masses, but in effect it was planned from by the government, as indicated by Heydrich’s order to the SS, which was given at one minute after midnight. In many places, rioters went out straight from the parties and rallies of Nazi Party members. Many of them were also drunk.

The pogrom was initiated by Goebbels – the Nazi propaganda minister who received Hitler's approval to commemorate the day of the putsch in the beer hall and the November revolution, which was held that evening in Munich.

The pretext for the commission of the pogrom was the death of Ernst Vom Rath – the third secretary in the German Embassy in Paris on September 7 by a German Jewish youngster called Herschel Grynszpan, who shot him in protest and frustration of the deportation of his family with 17 thousand Jews to Zbaszyn in Poland. It was said that Herschel received a letter from his sister, describing their suffering at the Polish border. Herschel bought a pistol and cartridges and planned to murder the ambassador, but he met a secretary who asked him what he wanted, and he shot him but did not kill him. Two days later, the secretary died of his wounds.

Goebbels took advantage of this opportunity to increase the emigration of German Jews by “collective punishment” of German Jews following the murder of a German by a Jew. Thereby, he gave the signal for the outbreak of the pogrom. Throughout the night and the following morning, synagogues were destroyed and burnt, cemeteries were desecrated, Jewish owned stored were ransacked and destroyed, Jews were beaten and humiliated in public, arrested and murdered. Many men were sent to concentration camps, from which they did not return.

Under orders from high up, the police abstained from intervening against the rioters or restoring order. The blazes were only put out where there was danger of fires spreading to the homes and property of non-Jews. The destruction, abuse and murder lasted all night long, unhindered, and stopped in the morning, also following an order from high up.

Crystal Night symbolizes an increase in the level of the anti-Semitic activity of the Nazi state. From harassment, verbal violence and gradual pushing of German Jews, to a pogrom – physical violence and murder at a nationwide level. The aims of the Nazis were largely achieved: German emigration from Germany increased and some 80,000 Jews left the Reich territory from late 1938 until the outbreak of World War Two. Under the leadership of Goring, Arianization – the removal of Jews from the German economy, gained momentum after Crystal Night, as a collective punishment that the Jews had allegedly caused.

In a characteristic Nazi ploy, the abuse victims were required to compensate the German state for the crime that had been committed against them. The insurance payments for Jewish store window damage of 10 million marks were expropriated by the Reich. Beyond this, the Jewish public was required to pay a ransom of a billion marks. The ransom – a total of 20% of the total property of all Jews of Germany – was collected based on the details capital declarations that Jews were required to fill in the spring of 1938.

Apart from the ransom payment, the Jewish public faced a flood of edicts and humiliations between the pogrom and the outbreak of the war on September 1, 1939, which were intended to emphasize their status as outcasts and displace them from their remaining holdings in the German economy. Jews were required to close their businesses and workshops and transfer their immovable property to Arian owners at loss prices; they were banned from driving automobiles or visiting the theater, concerts and cinemas; Jewish children were expelled from public schools and Jewish students expelled from universities; Jewish lawyers were debarred and Jewish physicians lost their licenses, to be defined from now on as “therapists” who were allowed to care for Jews only; movement and housing right restrictions were imposed on Jews, among other limitations. Finally, Goring ordered Heidrich to open a “central Jew emigration office” in Berlin in January 1939. The office was headed by an expert in forced emigration, and later deportation, Adolf Eichman, who was authorized to apply the blackmail and forced migration method that he had successfully applied – from the Nazi perspective – to the Jews of Austria after its annexation in Germany too.

Despite the angry reactions around the world and the decision of a number of countries to sever diplomatic ties with Germany, the Nazis learned that the response of the world to the murder of Jews was not determined or significant. This paved the way to the extermination of Europe’s Jews in the Holocaust. 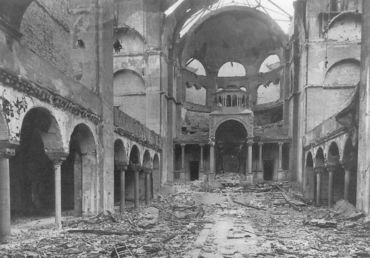