Nahmanides (1194 – c. 1270) was a Catalan rabbi, philosopher, physician, Kabbalist and biblical commentator. "Nahmanides " is the common name for Moshe ben Nahman Gerondi; the name is a Greek translation of the Hebrew "Ben Nahman", meaning "Son of Nahman". He is also commonly known as Ramban (רמב"ן), being an acronym of his Hebrew name and title, Rabbi Moshe ben Nahman רבי משה בן נחמן

Nahmanides was born at Girona (hence his name "Gerondi") in 1194, and died in the Land of Israel about 1270. He was the grandson of Isaac ben Reuben of Barcelona and cousin of Jonah Gerondi; his brother was Benveniste de Porta, the bailie of Barcelona. Among his teachers in Talmud were Judah ben Yakkar and Meïr ben Nathan of Trinquetaille, and he is said to have been instructed in Kabbalah (Jewish mysticism) by his countryman Azriel.[1]

Nahmanides studied medicine which he practiced as a means of livelihood; he also studied philosophy. During his teens he began to get a reputation as a learned Jewish scholar. At age 16 he began his writings on Jewish law. In his Milhamot Hashem (Wars of the Lord) he defended Alfasi's decisions against the criticisms of Zerachiah ha-Levi of Girona. These writings reveal a conservative tendency that distinguished his later works — an unbounded respect for the earlier authorities.

In the view of Nahmanides, the wisdom of the rabbis of the Mishnah and Talmud, as well as the Geonim (rabbis of the early medieval era) was unquestionable. Their words were to be neither doubted nor criticized. "We bow," he says, "before them, and even when the reason for their words is not quite evident to us, we submit to them" (Aseifat Zekkenim, commentary on Ketubot). Nahmanides' adherence to the words of the earlier authorities may be due to piety, or the influence of the northern French Jewish school of thought. However, it is thought that it also may be a reaction to the rapid acceptance of Greco-Arabic philosophy among the Jews of Spain and Provence; this occurred soon after the appearance of Maimonides' Guide for the Perplexed. This work gave rise to a tendency to allegorize Biblical narratives, and to downplay the role of miracles. Against this tendency Nahmanides strove, and went to the other extreme, not even allowing the utterances of the immediate disciples of the Geonim to be questioned. 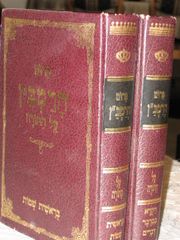