The Mizrahi Workers party was formed in Jerusalem in 1922 as a religious-Zionist organisation that supported the founding of religious Kibbutzs and Moshavs where work was done according to Jewish law. Its name came from the Mizrachi Zionist organisation, and is a Hebrew acronym for Religious Centre (Hebrew: מרכז רוחני, Merkaz Ruhani). The name does not refer to Mizrahi Jews (Jews from North Africa and the Middle East), as party members were primarily Ashkenazi, i.e. of European descent.

For the elections for the first Knesset the party ran as party of a joint list called the United Religious Front alongside Mizrahi, Agudat Israel and Agudat Israel Workers. The group won 16 seats, of which the Mizrahi Workers took five, making it the third largest party in the Knesset after Mapai and Mapam. It was invited to join the coalition government by David Ben Gurion and Mizrahi Workers member Haim-Moshe Shapira was made Minister of Internal Affairs, Minister of Health and Minister of Immigration in the first government.

The United Religious Front played a major part in bringing down the first government due to it disagreement with Mapai over issues pertaining to education in the new immigrant camps and the religious education system, as well as its demands that the Supply and Rationing Ministry be closed and a businessman appointed as Minister for Trade and Industry. Ben Gurion resigned on 15 October, 1950. When the problems had been solved two weeks later, he formed the second government with the same coalition partners and ministers as previously.

In the 1951 elections the party ran for the Knesset alone under the title of Torah and Work - Mizrahi Workers (Hebrew: תורה ועבודה-הפועל המזרחי, Torah ve-Avoda - HaPoel HaMizrahi). They won eight seats, making them the fourth largest party. Again they joined the governing coalition, and remained a member through all four governments of the second Knesset. Shapira kept his position as Minister of Internal Affairs and also became Minister of Religions. When the third government collapsed, Shapira lost the Ministry of Internal Affairs and became Minister of Welfare. He regained the Ministry of Internal Affairs in the sixth government. Yosef Burg also became a minister, heading the Health Ministry in the third government, and the Postal Services Ministry in the fourth, fifth and sixth.

For the 1955 elections the party joined forces with its ideological twin, Mizrahi, to form the National Religious Front. The new party won 11 seats, making it the fourth largest, and were again coalition partners in both governments of the third Knesset. In 1956 the union of the two parties was made permanent, and the name changed to the National Religious Party, which remains an influential force in Israeli politics to this day. 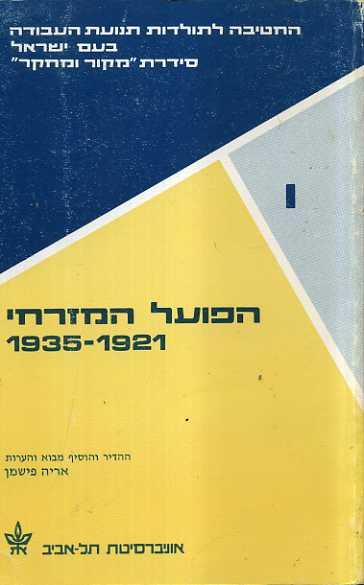