Ben-Zion was born in Jerusalem, where his father, Joseph Raphael, was the av bet din of the Sephardi community of Jerusalem, as well as president of the community council. At the age of twenty he became a yeshivah teacher and also founded a yeshivah called Mahazikei Torah for Sephardi young men. In 1911, he was appointed hakham bashi of Jaffa and the district. Immediately upon his arrival in Jaffa he began to work vigorously to raise the status of the Oriental congregations there. In spirit and ideas he was close to the Ashkenazi rabbi of the Jaffa community, A. I. Kook, and their affinity helped to bring about more harmonious relations than previously existed between the two communities.

During World War I he was active as a leader and communal worker. His intercession with the Turkish government on behalf of persecuted Jews finally led to his exile to Damascus but he was permitted to return to Eretz Yisrael, arriving in Jerusalem before the entry of the British army. In 1921 he was appointed chief rabbi of Salonika, accepting this office with the consent of the Jaffa-Tel Aviv community for a period of three years. He returned to become chief rabbi of Tel Aviv in 1923, and in 1939 was appointed Chief Rabbi of Palestine. Ben-Zion was a member of the temporary committee of Jews in Israel, a member of the Va'ad Le'ummi, and a representative at the meeting which founded the Jewish Agency. He appeared before the Mandatory government as a representative of the Jewish community and on missions on its behalf, and impressed all with his dignity and bearing. He was also founder of the yeshivah Sha'ar Zion in Jerusalem. He contributed extensively to newspapers and periodicals on religious, communal, and national topics as well as Torah novellae and Jewish philosophy.

Two days before his death he dictated his testament. It said, inter alia, "I have kept in the forefront of my thoughts the following aims: to disseminate Torah among students, to love the Torah and its precepts, Israel and its sanctity; I have emphasized love for every man and woman of Israel and for the Jewish people as a whole, love for the Lord God of Israel, the bringing of peace between every man and woman of Israel—in body, in spirit, in speech, and in deed, in thought and in meditation, in intent and in act, at home and in the street, in village and in town; to bring genuine peace into the home of the Jew, into the whole assembly of Israel in all its classes and divisions, and between Israel and its Father in Heaven." 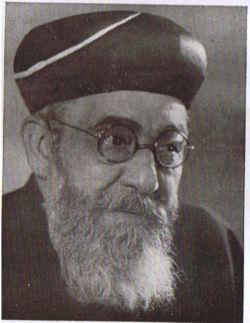