Tel Hai (Hebrew: תל חי‎, meaning "Hill of Life" in Hebrew; Talha in Arabic) is the modern name of a settlement in northern Israel, the site of an early battle in the Arab-Israeli conflict, and of a noted monument and tourist attraction.

Tel Hai was intermittently inhabited since 1905 and permanently settled as a border outpost in 1918 following the defeat of the Ottoman Empire. The area was subsequently subject to intermittent border adjustments among the British and the French. In 1919, the British relinquished the northern section of the upper Galilee containing Tel Hai, Metula, Hamrah, and Kfar Giladi to the French jurisdiction.

In 1921, Tel Hai was resettled and in 1926 was absorbed into the kibbutz Kfar Giladi.

A national monument in Upper Galilee, Israel commemorates the deaths of eight Jews, six men and two women, among them the one-armed, Russian-Jewish independence fighter Joseph Trumpeldor, in an engagement on 1 March, 1920 with Bedouin who had been attacking settlements in the area.[1] The resolute actions of Trumpeldor and his colleagues against a much larger attacking force inspired the Jews of Jerusalem.[1] The memorial is best known for an emblematic statue of a defiant lion representing Trumpeldor and his comrades. The city of Kiryat Shemona, literally Town of the Eight was named after them 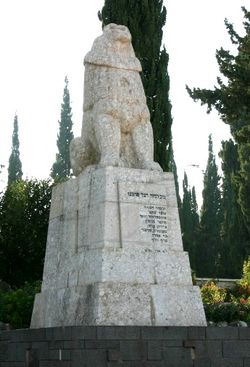